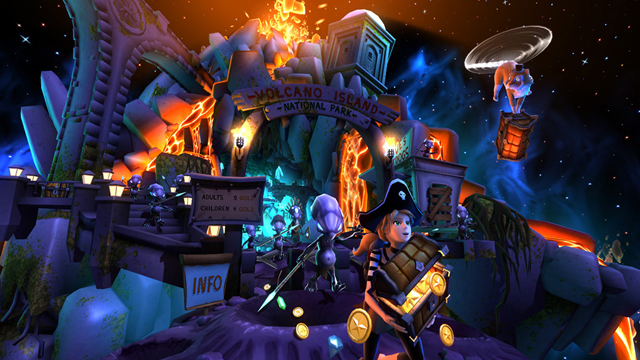 I founded the indie games studio “Exit Strategy Entertainment” with 3 other developers to create a 3D Jump’n Run for PC, XBLA & PSN. My primary responsibilities were not design-related (in specific: marketing, PR, business development andcommunity management), but I assisted the development by creating level prototypes and polishing the game’s features with the programmers and creative lead.

One of my missions takes place in a huge swarm of space jellyfish. The cartoony sci-fi theme allowed us to do all kinds of crazy settings. The protagonist of the game is the girl “Annha” who has been brought up by space pirates. When she gets hold of her own ship she embarks on a cruise through the galaxy to loot all the gold she can find. Thanks to her acrobatic skills and gadgets she can move through the environment rather freely. It’s fun to just roam around a level double-jumping, spline surfing and using the character’s items e.g. the grappling hook to navigate to distant places. This level supports this vision and the player has to bounce from jellyfish to jellyfish and extract gold by double jumping on the squishy creatures. As far as the visuals go, the player had to get the feeling that they are amidst a giant swarm, which was a challenge to pull off without losing too many frames per second. We solved this by teleporting jellyfish (which travelled constantly upwards), in the distance/mist and placing particle effects resembling jellyfish at the edges of the scene which come at a much cheaper price than 3D objects in terms of performance.