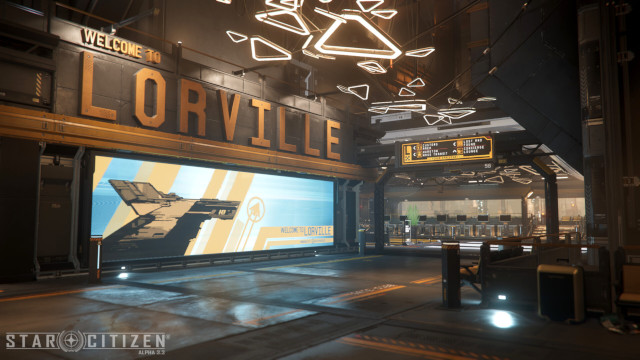 During my time at Cloud Imperium Games I have designed locations for the persistent universe of ‘Star Citizen‘. From cities on planets to space stations I have contributed to the many exciting gameplay spaces Star Citizen is inviting players to explore. Here is a selection of the biggest projects on Star Citizen that I’ve been involved in:

Out of the four corporate-owned capital cites in the Stanton system, ‘Lorville’ on the planet of Hurston was the first major planetary landing zone that we’ve built for the Persistent Universe. A dystopian industrial city owned by an oppressive mega corporation that focuses on the production of ship weapons and components and that I was responsible for from the level design-side.

The 2nd flagship landing zone that I worked on is the capital of microTech: ‘New Babbage’. The chip manufacturer turned the terraforming accident that froze the entire planet into their lucky fortune by using the freezing temperatures to cool their hardware. Most business and social life happes underneath the giant glass domes of New Babbage. A chance for me to apply lessons learned during the development of Lorville and introduce the first high-tech capital city to the ‘verse.

‘Common Elements’ is what we call building blocks for locations that are used across multiple landing zones in the Persistent Universe. Examples of these that I have designed are hangars, security checkpoints and transit platforms. They share the same functionality but depending on the location can have visual variations (lowtech vs. hightech, location-specific brandings etc.). They are great for standardization and faster production times. Ideally, they are designed with modularity in mind, that means, that they can be easily adapted to fit a specific location’s needs (e.g one track vs two tracks on a transit platform) or to introduce more variation in terms of appearance (e.g. a hangar that uses different wall and alcove modules than the others).